American culture has very much been influenced in the 2000’s by the impact that the internet has made on society. Perhaps the most exemplary of our cultural fascination with the internet is the magnitude of the growing trend toward social media. Whether we like it or not, mastering the social media ‘game’ as businesspeople seems like a skill we must acquire to reach the younger generations. But to what extent is the social media experiment exclusive to the “Generation-y’ers” among us? A recent study conducted by the Pew Research Center presents some pretty telling data on the social media puzzle.

Contrary to what may be popular belief, 52% of the 50-64 year age bracket use some form of social media; 77% of 30-49 year-olds check in on a regular basis, and 83% of consumers ranging from 18-29 years of age will visit their social media page regularly. It’s probably not a surprise to you that social media usage ranks more prominently among America’s younger adults, but the fact that over half of all baby-boomers check into their Facebook/LinkedIn account at least semi-regularly? Wow. That’s enough to make you re-think your marketing strategy!

Another important finding from the Pew Center’s analysis is the correlation between social media usage and household income. In what could be considered a luxury, the social media spectrum actually samples conversely with regard to household income, whereas the leading users tend to be the lowest earners. Homes raking in less than $30,000 per year rank highest (72%) among the four income categories sampled in the Pew survey. Another statistic of note is social media usage by race. Hispanics (72%) lead both African- Americans (68%) and Whites (65%) in social media connectivity and men trail women by 9% overall in their aptness to engage with the social media world. (71% vs. 62%)

Which social media forum is king? That prize goes to Facebook, the unchallenged champion, with its 1+ billion monthly users, 67% of adults associate with it. LinkedIn garners 20% usage among adults and Twitter (16%), Pinterest (15%), and Instagram (13%) all command a reasonable portion of the social media pie. 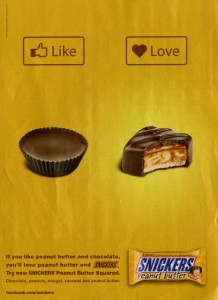 The impact of social media is not limited to the web, however. In a March 24th article appearing in the NY Times, it’s shown that social media’s presence has even been showcased in more traditional modes for advertising. The “language” of social media, being spoken in print advertising of late, has proven to be a common means to communicate to consumers. A recent Snickers magazine ad used the Facebook-esque “like” terminology to draw at the “heartstrings” of its Facebook-friendly candy connoisseurs, comparing its beloved product with that of its merely liked competitor.

In a world where “likes,” “status updates,” and “fans” are serious considerations for your marketing and sales scheme, what are you doing to corner the massive allotment of the market that may be logging in to Facebook in search of products, promotions, or information about your service?

Sharp Innovation’s Social Media and Blogging Management service aims to take advantage of this industry trend to the benefit of its clients. Our savvy social media technicians know how to enhance your social media and blogging presence.